When I moved to Michigan, I knew the agriculture would be different… and Michigan has delivered.  The climate, the soils and the people have all proved to be a different breed when compared to my home state of Kansas.  In the past year, I’ve had discussions with growers involved in tart cherries, cider apples, hops, soybeans, and more.   So many different crops, in fact, that it’s becoming difficult to keep everything I’ve learned straight!  In an effort to help myself out, I’ve decided to keep track of the things I learn in the field via this blog.

For the first crop, I’d like to talk about chestnuts.  This is the crop that is probably the furthest outside of my knowledge base – prior to this year, I’d never even eaten a chestnut!   The learning curve has been extremely drastic, but here are four things I’ve learned about this crop.

1.  Chestnut trees can be extremely difficult to grow.

Last week, I had the opportunity to attend the Midwest Chestnut Producers Council (MCPC) annual farm tour.  They hosted the event at a new orchard outside Ravenna, MI, where the grower talked about the difficulties he had over the past couple years.  While I’m no agronomist (I’m hardly a gardener), his discussion of the trials and tribulations associated with establishing his 10 acre orchard was eye-opening.  Although an established orchard can thrive for decades (if not centuries), planting the trees requires many considerations as the gap between planting and nut production is generally five to ten years! 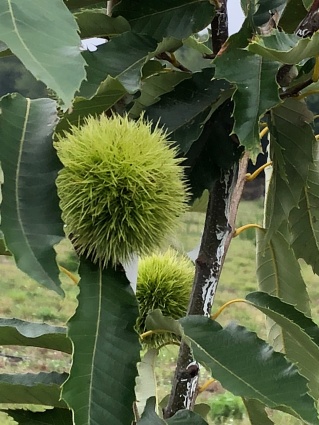 In the orchard we toured last week, the grower had dug his holes slightly too deep, which prevented adequate oxygen from reaching the roots, killing more than half of his saplings.  Annual weather patterns also influence the livelihood of chestnut saplings and mature trees. Last year was particularly challenging for Michigan growers because the fall season was wetter and milder than usual. This caused the trees to ramp down production more slowly and enter dormancy late, leaving the trees vulnerable to freezing winter temperatures. Despite the warmer fall temperatures, the winter temperatures plummeted near the danger zone for the chestnut trees’ hardiness (approx. -20 degrees Fahrenheit) a few times. To make matters worse, the orchard was surrounded by large trees on all sides, which trapped cold air in the winter and contributed to the demise of his saplings.

When I was asked to present something to the MCPC back in Spring 2018, the first thing I did was to go to the Food Demand Survey to see if any consumer data had been collected in the recent past.  To my delight, Bailey Norwood had recently sent a survey out to 1,022 U.S. consumers. More than 60% of U.S. consumers could not recall ever trying a chestnut!  Almost half (14.5%) of those Americans who had tried a chestnut had only consumed one in the last year.

As one might expect, the consumers who eat chestnuts at least once per year were more likely to be vegetarian.  This is likely good news for chestnut demand, as an increasing percentage of Americans are interested in plant-based proteins.  In fact, a Nielsen survey this past summer found that 39% of Americans are actively trying to eat more plant-based foods.  Even the big players in animal-based proteins are investing in non-meat alternatives.

Chestnut consumers in the United States are also more likely to be younger.  If I break the sample of 1,022 U.S. consumers down by age category, we see that the majority of 18 to 34 year olds in our sample had in fact tried chestnuts in the past year.  This is grounds for optimism, as chestnuts require a relatively large amount of knowledge to prepare properly (Search YouTube for “exploding chestnuts” and you’ll see why).  The fact that consumers are being exposed to chestnuts at a younger age is great because they will hold that preparation knowledge with them throughout their lives.

3.  Growth in U.S. consumer demand for chestnuts is likely to track immigration patterns.

Bailey surprised me again, as he had just recently surveyed 1,000 Chinese consumers to compare nut preferences across the United States and China.  The results shocked me.  Where more than half of Americans hadn’t tried a chestnut, almost every single Chinese consumer (97%) was extremely familiar with the product.

This is an optimistic fact for the burgeoning chestnut industry, because despite the current rhetoric, immigrants contribute substantially to the growth and vibrancy of the cities they live in.  As such, chestnut marketers might be best off targeting the cities that are most welcoming to immigrants.  In the future, I’d like to survey certain cities in the U.S. to compare chestnut demand for different immigrant communities.  I don’t really know how that data might shake out, but I think it would be an interesting exercise to see the different ways these communities incorporate chestnuts into their diets.

Probably my biggest takeaway from the Michigan chestnut growers so far is their dedication to promoting the industry.  I’ve attended two meetings thus far, and was very impressed by the passion of the group’s leadership.  These people are willing to do whatever it takes to grow the chestnut industry!  As is often the case in agriculture, they’ve had “up” years and “down” years, and while that variability might push other growers apart, it seems clear to me that it actually brought the leadership of the chestnut industry together.

As an example, consider their marketing strategy from a few years back.  In an effort to promote chestnuts as a high-end product, they applied for a USDA grant to pay high-end Michigan chefs to try Michigan chestnuts in a new recipe.  The buzz generated enough interest from chefs across the country that Martha Stewart even proposed a recipe.  This strategy tracks Malcolm Gladwell’s book The Tipping Point extremely well.  The marketing strategy is connected to the idea of a “maven”, which is Yiddish for “one who accumulates knowledge.” (Gladwell, pg. 60).  They’re the influencers.  These are the people the rest of us look toward in an effort to get the best prices, try the best products, and prepare the most delicious meals.  By targeting the influencers, the MCP simultaneously targeted the population of amateur chefs and foodies who are connected to the influencers.

Though currently understudied, the effects of this innovative marketing strategy can still be observed in a few random places across the state.  For example, while having dinner at Hermann’s European Café in Cadillac, Michigan, a month back, hanging above the entrance was an article from the Chicago Tribune titled, “GOOD EATING: Return of the chestnut.”

One worthwhile project I’d love to see conducted is an “event study” on the effect of this marketing strategy on chestnut prices.  This would be methodologically similar to McKenzie and Thomsen’s 2001 Journal of Agricultural and Resource Economics paper on the effect of E. Coli 0157:H7 on beef prices, but of course the evaluation would be focused on the success (or failure) of a marketing strategy.

Thus far, I see nothing but room for optimism regarding Michigan chestnut demand – especially when I look at the competition.  Out of curiosity, I got on Amazon and ordered a package of organic chestnuts from Spain.  If I were to describe the packaging, “unappetizing” would be putting it lightly.  The vacuum-sealed chestnuts were exceedingly squishy, the smell seemed off, and the shiny plastic covering the chestnuts did not appear too alluring.  Michigan chestnut growers have a clear comparative advantage over these competitors, as they can sell fresh chestnuts – which are far more appetizing than this hyper-processed alternative.  Prior research suggests fresh chestnuts are likely best marketed via institutional buyers such as restaurants “in order to create a positive experience for consumers that should lead to an increased interest in consuming chestnuts.” (Gold, Cernusca, and Godsey, 2004; pp. 588).

In terms of future marketing research related to chestnuts, the published papers I’ve been able to find are somewhat dated.  For example, Gold, Cernusca, and Godsey collected survey data from 232 participants at the 2003 Missouri Chestnut Roast.  Their work, published in HortTechnology in 2004, suggested that consumers at this roast considered  the locally grown nature of chestnuts to be the most important attribute.  Even at the Missouri Chestnut Roast, more than 60% of attendees had never tried a chestnut before that day.

That study was followed up via the use of conjoint analysis (read: discrete choice experiment) in 2007 at the same festival.  The surveyed sample was significantly more likely to have tried a chestnut, as only 34% had never tried a chestnut this time.  Their findings, published in HortTechnology in 2009 (n=104), suggest that the festival participants again valued the “localness” of the product they were consuming and that price was the least important attribute.  I would like to revisit this study for a number of reasons.  First, the study is over a decade old, and consumer preferences are likely to have even changed.  Second, it is unlikely that the festival participants are representative of the chestnut consumers more generally.  Third, I am skeptical of the (relatively) small price coefficient and believe that consumers at a local foods festival are likely to overstate their willingness to pay for local foods.  I’d like to re-run this hypothetical experiment with different attributes and focus on a representative sample of U.S. consumers.  Then I’d like to conduct non-hypothetical choice experiments on a stratified sample of urban consumers – perhaps at farmers markets or at a sensory lab.

To reiterate, I am NOT an expert on chestnuts by a country mile.  That being said, Michigan State University has a strong handful of dedicated folks who have probably forgotten more about chestnuts than I’ll ever know.  Here are links to contact pages for a few of them